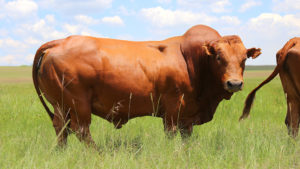 The Bonsmara originates from South Africa, it has been scientifically bred and strictly selected for economical production in extensive cattle grazing in sub-tropical climates. In 1937 it was generally noted that British breeds did not have the required heat tolerance for the sub tropics and that the Afrikaner did not perform as well in terms of calving regularity. Professor Jan Bonsma decided to test different breed combinations at the Messina Livestock Research Station.

Bulls of five British Beef breeds were used on Afrikaner cows and the progeny then performance tested. After pilot trials it was decided to continue only with the better performing Hereford and Shorthorn cross-breds. Ultimately three-quarter Afrikaners were mated to half-breeds to obtain progeny with 5/8 Afrikaner and 3/8 Hereford or Shorthorn blood.

The first results were already encouraging. Under the management circumstances prevailing at Mara in those days, the weaning weights of the crossbred cows were on average 195kg at 240 days (about 20% higher than those of the three parent breeds). Likewise the calving percentages of the crossbred cows were appreciably higher. The calf mortality was much lower than in the British Beef breeds and close to that of the more resistant Afrikaners.

Through strict selection of breeding animals rapid progress was made. Within 20 years after the initial cross-breeding trials a superior cattle breed, performing better than other breeds in the bushveld of the Northern Transvaal, had been established.

The name “Bonsmara” was derived from “Bonsma”, the man who played a major role in the development of the breed, and “Mara”, the farm on which the animals were bred.

Interestingly, Bonsma had a unique method of scale photography, so Bonsmara is the only breed in the world that can boast a pictorial genealogy from the very beginning of the breeding work until the new breed was established.

The Bonsmara has become so popular that it has grown to be numerically the strongest beef breed in South Africa in less than 25 years.

The Dorper breed is now numerically the second largest breed in South Africa. Although the Dorper breed was declared indigenous to South Africa, it has found its way all over the world in countries such as Australia, New Zealand, The United Kingdom, Middle East, China, Canada, Germany, Switzerland, Brazil, Argentina, South America, Mexico, United States, various African countries, Israel and Namibia, where farmers now farm with this magnificent breed because of its outstanding qualities.

“Farmers breed Dorpers for money in their pockets…Consumers buy Dorper meat for a special taste sensation!”